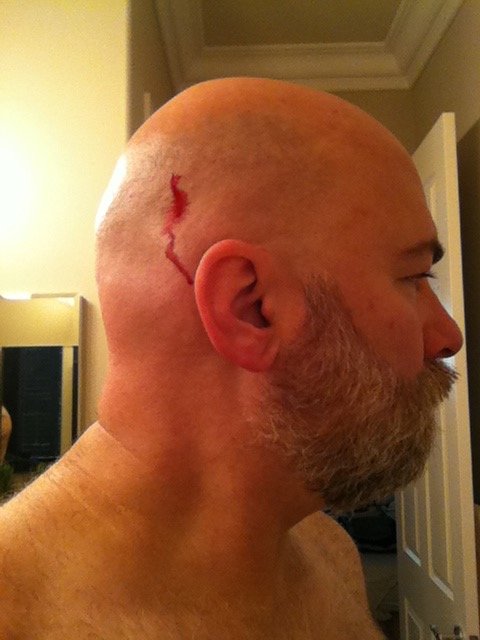 There is something satisfying, even life affirming, about getting a good deal. It makes me feel smart, clever, and resourceful.

So when the banner ad for the XYZ Shave Company (not its real name) came up on my Facebook page, it caught my interest.

I’ve been shaving for over 40 years, and while shaving is sometimes a short escape from the drudgery of life, it is, in reality, a big part of the drudgery of life. So any way to “keep it fresh” by trying a new product, especially if it’s free or at least a bargain, usually grabs my attention.

The XYZ Shave Company had a deal. They would send a sleek, colorful, well-crafted razor, with a can of shaving gel, for – follow me here – $15.00 plus $3.00 shipping minus $15.00. Now I went all the way up through calculus when I was back in college, so I took out my abacus, and concluded that I could get a cool new razor for $3.00 with a can of shave gel. I double-checked my math on my old slide-rule, and it reconciled. So I clicked the link, and my nifty new men’s grooming tools were on their way.

A few days later, the box landed on my doorstep, and I retired to the laboratory (my bathroom actually) to conduct the experiment, and savor the new experience. The razor felt good in my hand, and the shave gel had a nice smell (not the least bit important, by the way), and off I went.

After taking care of my neck and face with a different razor, I lathered up my head with the new gel, rinsed off the new blade, and went to work. I made my first round (front to back), rinsed, and re-lathered for the second round (back-to-front).

Like a pitcher in his wind-up, I reached back, got a grip, and brought my left arm forward. Suddenly there was a flash of lightening! I saw colors I had never seen before! The sound of a metal car hitting a metal guardrail screamed through my inner ears, and that feeling you get when outposts of your nervous system are suddenly on fire, filled my brain. I had taken off a chunk of skin the size of Wisconsin! 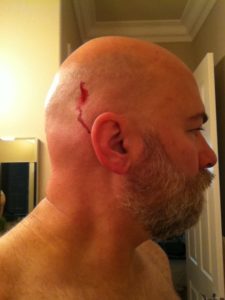 I mentioned how smart and clever I feel when I get a good deal. This kind of incident makes me feel like a bonehead. “Seriously, Dude! You’ve been shaving for decades and you still cut yourself!” (Sometimes, when I am rude to myself, I address myself as “Dude.” It annoys me even more.)

With great trepidation, I examined the razor. I really couldn’t see the blades on account of the huge piece of skin in the way! After calling a tow truck to unhook and haul away the former body part, I attended to the pool of blood that might have excited a Red Cross volunteer at a blood drive. (I’d never considered having a professional boxing “cut man” in my bathroom before, but I could have really used one.)

I gingerly finished the “beautification” process, and then hit the shower. I survived, but had to endure the horrified questions when my friends inquired about the divot on the back of my head. I still have a scar as a memento from the adventure.

Shortly thereafter, I received an e-mail from the company, alerting me that it was time for my automatic refills of blades and shaving gel. I immediately clicked, “Do Not Send.” A couple of days later, I received notification that I had not responded in time (not true at all), and the package was on its way, for $30.00. ($30.00 for shaving gel! Like I’m buying this stuff for future generations?)

I e-mailed the company to advise them that I didn’t presently need any more blades and shave gel. Partly because I had barely received the first shipment, and partly because I was waiting for my scalp to heal before even thinking of shaving again!

I received an e-mail from a nice young woman, who apologized profusely and repeatedly for the injury. She told me that she would credit my account for the $30.00, and even was going to refund my original $3.00 fee for the trial package. (Oh yeah, the $3.00 refund totally made up for the missing skin and blood!)

She asked me to share with her the details of my shave when the “event” occurred. I gave her some details, and shared with her a few of my observations that would make their product better. (I wasn’t angry at all. I generally support independent start-up companies, and admire the moxie it takes to get a business off the ground.) I even offered to test any future products they cared to send my way, for an honest and thoughtful evaluation, and thanked the young woman for her customer service, her kindness, and her concern. I felt she was genuinely sorry for my discomfort, and like Bill and Hillary, she “felt my pain.”

The moral of the story: there is no moral. Things happen. A shocking experience turned out to be an opportunity to see that some people do care, and a reminder to examine a new razor before it makes a landing on my head!

And, when they start embedding microchips in our skulls, I already have the notch! 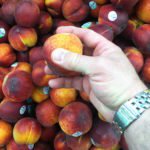 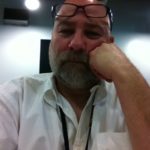